Mark the Apostle and Evangelist 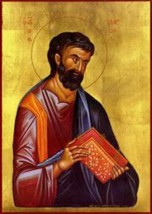 Mark was an idolater from Cyrene of Pentapolis, which is near Libya. Having come to the Faith of Christ through the Apostle Peter, he followed him to Rome. While there, at the prompting of Peter himself and at the request of the Christians living there, he wrote his Gospel in Greek, and it is second in order after Matthew's. Afterwards, travelling to Egypt, he preached the Gospel there and was the first to establish the Church in Alexandria. The idolaters, unable to bear his preaching, seized him, bound him with ropes, and dragged him through the streets until he, cut to pieces on rocks, gave up his soul. It is said that he completed his life in martyrdom about the year 68. He is depicted in holy icons with a lion next to him, one of the living creatures mentioned by Ezekiel (1:10), and a symbol of Christ's royal office, as Saint Irenaeus of Lyons writes.

If April 25 falls on or before Great and Holy Pascha, the Feast of St. Mark is translated to Bright Tuesday.

Apolytikion of Apostle and Evangelist Mark in the Third Tone

O Holy Apostle and Evangelist Mark, intercede to our merciful God, that He may grant our souls forgiveness of sins.

Kontakion of Apostle and Evangelist Mark in the Second Tone

When thou hadst received the Spirit's grace from Heaven's heights, thou rentest apart the webs of the philosophers; and on catching all of the nations in thy net, O all-lauded Mark, thou didst offer them to thy Lord, by preaching the Gospel of divine renown.