formerly established as the

In December 2003, through the guidance of the Holy Spirit, members of the community decided to found a new Greek Orthodox Mission in the greater Ocala area, in the hopes of also appealing to and encompassing nearby townships. Father George Papadeas, whose service in Christ was already well-known and respected, agreed to provide spiritual leadership and guidance.

With no funds or supplies, the community came together to plan the Mission’s first liturgy service and within one week everything miraculously came together. An alter cloth was sewed; makeshift icons were manufactured by enlarging internet graphics and pasting them to cardboard; essential liturgical supplies were provided by a retired priest in Miami; and so on. The first Divine Liturgy took place at Trinity Catholic HS on January 11, 2004. The following month, the Mission was formally incorporated with the State of Florida as the Greek Orthodox Mission of Greater Ocala. In only two months, the congregation had grown to 25 parishioners—it would continue to grow every week thereafter.

In the beginning of his time with us, Fr. Papadeas held services twice per month to afford him time to care for his beloved wife, Presbytera Bess. That Easter, a miracle in and of itself, a parishioner fabricated an Epitaphio out of PVC pipes, after which the ladies of the Church decorated it with flowers, ferns, and all manner of greenery. It was a beautiful sight to behold, and one which our blessed Presbytera was able to enjoy. She celebrated Easter with us and participated in the Holy Resurrection of our Lord. One week later, she left our earthly realm to be with our Lord and Savior.

Fr. Papadeas donated all the memorial donations received on her behalf to our building fund, devoted for the construction of the first phase of our Church. Then he began serving our community every week after his dear wife passed. In order to do this, every Saturday, Father Papadeas (only 92 years young) drove 80 miles from Daytona Beach to Bible Study and would stay for services on Sunday. He said our community helped him grieve and gave him renewed purpose to continue ministering. We were very glad, lucky and honored to have Father Papadeas serving our community.

Soon thereafter, the community began a search for an existing building/land to purchase for the new Church. After an exhaustive search, 9.6 centrally located acres in Belleview seemed just the right fit. The land was purchased in January 2006. As a result of intense and constant fundraising activities, the community was able to make the purchase and pay the balance of the mortgage in three years.

From that point on, miraculous events occurred in rapid sequence. A parishioner donated 130 trees, which surround the perimeter of the property and comprise the most beautiful part of the Serenity Garden. This donation also included fencing, an irrigation system, a well, and a utility pole. Many Orthodox business persons have come forward to donate their time and expertise in planning, development and related engineering projects, without which our Church would not work. In July 2009, we broke ground on the Church’s most daunting task to date: construction of its 14,000 sq. ft. hall, which includes our chapel. We received our certificate of occupancy from the authorities in 2010. While the Hall remains a work in progress, the chapel is a blessing to behold, and many outstanding events have been held within the hall itself providing schools with testing space and a safe, central location for our popular annual festivals.

On May 14, 2011, His Eminence Metropolitan Alexios, celebrated our Opening  Door Ceremony naming our Church St. Mark the Evangelist Greek Orthodox Church. On the following day, His Eminence honored Father George Papadeas by dedicating the hall in his name to be known as the Father George Papadeas Community Center. A plaque with this designation was placed on the southwest corner of the hall.

A few months later, an era came to an end when we lost Father George Papadeas, our beloved founder and spiritual leader, who fell asleep in the Lord on November 18, 2011. Since his passing, we have been honored by the service of many supply priests, not the least of which were Father Christodolous Papadeas and Father Maximos Pafilis, but also Father Michael Soter, Father Nicholas, Father Constantine Tsigas, Father David Rucker, and Father Hays. We are in their debt and they remain in our prayers.

Since November 2013, we have been blessed to have Father Nick G. Manousakis serve the St. Mark Parish as a part-time interim priest.  Father Nick drives over 80 miles each week, and on numerous occasions during the week, to serve St. Mark. We pray for his continued spiritual leadership for years to come.

To be sure, none of the achievements our community has accomplished so far would have been possible without many generous donations of all sizes, community support, and general fundraising activities. Since 2001, our primary fundraiser has been the hosting of an Annual Greek Festival, completely created and managed by our devoted parishioners. The Greek Festival brings together people and visitors from all across the country. Originally, Blessed Trinity Catholic Churhc generously gave the Church use of its hall, kitchen, and parking facilities for the Festival. For their selfless support, our Church has donated a percentage of the profits to Blesssed Trinity . We also designated some profits for other charitable purposes, besides our own Church. Additionally, we have partnered with Belleview Santos Elementary School and Interfaith Services by donating supplies and participating in Interfaith’s Food for Kids “Backpack Program,” sponsoring homeless children in need of food.

This is not all we have done or continue to do. Our small congregation is characterized by participation in many community activities. We provide testing space for Belleview High School. Annually, we host a dinner dance with live music, delicious food, and diverse fellowship. Our parishioners and the community also look forward to bake sales, bazaars, the Church bookstore, and many other activities.

Not least of these other activities is the “OPA” cruise ministry, started in 2007 by Father George Papadeas and our parishioners. Its goal is to establish and spread Orthodoxy by financially supporting Orthodox missions starting with the St. Mark mission.  Orthodox Christians enjoy a varied program of religious and cultural experiences as well as shipboard entertainment. Enjoying the fellowship of friends and family while supporting the proliferation of Orthodoxy is an unforgettable experience that must be enjoyed!

St. Mark currently hosts between 50 and 60 parishioners on any standard Sunday Liturgy, with over 75 pledged stewards. But on special events, such as the Holy Pascha, St. Mark welcomes many more! We currently have a weekly bulletin distribution to over 150 families.

We feel that our brief but colorful history is nothing short of a miracle through which the Holy Spirit continues to work. It is our hope that the Greek Festival, OPA cruise, and other fundraising events will help to build the final missing piece for St. Mark: a permanent Sanctuary.

We look forward to growing spiritually, continuing to give, and living in the joyous and loving community spirit that has always been the hallmark of our blessed Church family. 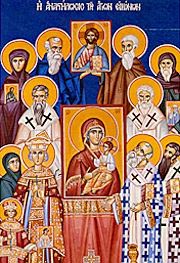