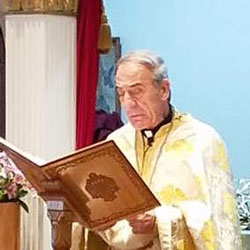 Father Nick Manousakis was born to his parents, George and Helen, in the village of Malaxa (Hania), Crete, Greece, and raised in Salt Lake City, Utah.  He graduated from the school of theology of the Aristotelian University of Thessaloniki.  Previously, he attended Holy Cross in Brookline, Mass.  Following graduation at the U. of Thessaloniki (graduating 3rd in a class of over 300 students), he married Kostoula Theodorakis, and together returned to Salt Lake City.  He was ordained in 1971, in the Church of Holy Trinity in Salt Lake City,  His first parish assignment was realized at the Cathedral of Saint Sophia in Los Angeles, CA.  After 47 years of active “duty” as a priest, father of four children and seven grandchildren, Father Nick retired from the parish of Saints Constantine and Helen in Washington, D.C, and returned to Daytona Beach, Florida were I was the Proistamenos for over 20 years.

We are honored to have Fr. Nick serving the Parish of Saint Mark the Evangelist in Belleview, Florida for the last four years. 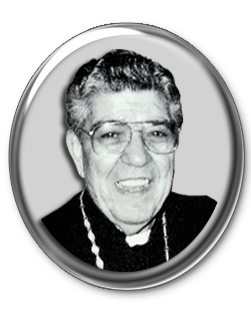 Although not his native tongue, Father George Papadeas spoke and typed the Greek language more eloquently than most Greeks. He could easily address Heads of State and he often did.

All that Fr. George set out to do, he did and did well. He would always say to his five children, in Greek, “Meeya, keh Kallo” which translated was “Do it once and Do it well”.

He lived his life by this teaching, accomplishing more than can be imagined of one individual who took Pride in everything that he did.

The Greek Orthodox faith lost a Pioneer of their Church. Father George Papadeas, born in Altoona, Pennsylvania to Greek Immigrants in 1918, died at the age of 93 from complications of congestive heart failure on Friday morning, November 18, 2011.

Prior to 1937, Greek Priests in America were imported from Europe to serve their Greek American faithful but World War II changed that. The Greek Orthodox Church in America realized that they needed to teach and produce their own Priests to serve the growing Church in America. George Papadeas enrolled in the Charter class of the newly formed Greek Theological Seminary at Pomfret Center, Connecticut.

Graduating Valedictorian in 1942, he then became the very first American Born Clergyman to be Ordained into the Greek Orthodox Church. As it turned out, he also became the longest actively serving Priest in the same church with over 69 Years of continuous service to the Church.

Throughout his career as a Priest, Fr. Papadeas was instrumental to the growth of the Greek Church in America. He broke new ground initiating many firsts and he created many programs that are still in use throughout parishes across the country.

Father Papadeas was passionate and driven, truly a “Jack of all trades”, but also a Master of Many. He could perform Services on Sunday and soon after swing a hammer like a seasoned carpenter… he actually did so in the construction of the altar of the new Church in Long Island. In the late 50’s, Fr. George generated the keyboard layout for Greek language typewriters to make it easier for American typists. He gave it to the Smith-Corona Typewriter Company for use in the construction typewriters for the Greek speaking community worldwide.

In 1960, at The St. Paul’s Cathedral on Long Island which he had founded only a few years earlier he brought a Weeping Icon of the Virgin Mary that began to tear in the middle of the night at the house of his parishioner, Pagona Catsounis. Hundreds of thousands from all faiths witnessed that manifestation and in 1990 was named by New York Newsday as one of the most significant events of the last 50 years. Then Vice President Nixon summoned him to the Whitehouse to hear the firsthand account of what had transpired and in 1990, on the 40th Anniversary of the Manifestation, Fr. George wrote his accounts in a book aptly titled, “Why Did She Cry?”

In 1963, Fr. George was the first to translate the Orthodox Holy Week Easter Services from Greek into English and subsequently published the book Holy Week Easter that has been used in communities Worldwide and considered the “gold standard”. The Retired Greek Clergy of America stated in their newsletter recently that “This Book saved Holy Week for our Orthodox Churches in America”

Fr. George went on to become the Dean of the Archdiocesan Cathedral in New York City and then continued his service in Greece and finally in Florida. His positions and accomplishments are too many to list but a partial history can be seen at www.FatherGeorgePapadeas.com.

Amongst countless recognition, he received the Order of Phoenix medal from the King of Greece in 1966 and was given the singular title of Head Protopresbyter by The Archbishop of North and South America, an honor given to only one Priest per lifetime.

Fr. Papadeas’ impact on the Greek Orthodox Religion and its followers was far reaching. He never retired, starting a New Greek Orthodox Community in Ocala at age 86 which he drove to by himself until just a few months before his passing. Father George Papadeas was 93.

Isaurus the Holy Martyr & his Companions of Athens; Manuel, Sabel, & Ishmael the Martyrs of Persia; Righteous Father Botolph, Abbot of the Monastery of Ikanhoe